The S&P 500 forward P/E is a subcomponent in the Valuation indicator in TJT’s proprietary InVEST Risk Model®. 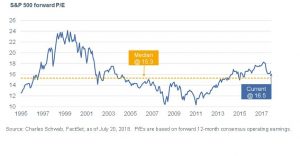 The equity market rallied in July despite the fact that the official trade war with China commenced on July 6, 2018. As President Trump had been threatening China with tariffs for months leading up to that date, it allowed ample time for hedges to be put on to protect against a falling market. As the world did not come to an end in early July, many of those hedges were removed, cash came in, and the market rallied.

The relief rally has not eliminated the uncertainty around a protracted trade war with China, which continues to be a potential headwind for the markets.

The LEI is a subcomponent in the Economic cycle indicator in TJT’s proprietary InVEST Risk Model ®.

Ongoing trade tensions dominated the headlines and market action in the month of June as concerns mounted that any tariffs imposed by the U.S. against our trading partners would be met with swift retaliation. The tit-for-tat threat of a trade war saw an escalation in rhetoric as China’s President Xi reportedly said “In the West you have the notion that if somebody hits you on the left cheek, you turn the other cheek…In our culture we punch back.”

Uncertainty over trade policy and elevated trade tensions, rising political instability, and the Federal Reserve tapping on the brakes have caused volatile swings in stocks, bonds, commodities and currencies. Higher debt levels across the board make economies more sensitive to higher interest rates, and interest rate spikes due to political uncertainty can have ripple effects across markets. (6.4.18)

The U.S. stock market was roughly flat in the month of April following some wide swings, and both the S&P 500 Index and the bond market are down on a year-to-date basis, something that has not happened in years.

The stock market has been in a correction phase since late January and volatility has increased due to concerns of a potential trade war with China, rising interest rates, and growing tensions in Syria and Iran. Following President Trump’s initial proposal to slap tariffs on steel and aluminum imports, China swiftly retaliated with announced tariffs of their own, including a 25 percent tariff on critical U.S. exports including soybeans, the biggest U.S. agricultural export to China, and airplanes. Although the proposed tariffs would not go into effect for months, if ever, clearly the threats are creating a heightened level of uncertainty for the markets.

Meanwhile, oil prices have been on the rise as a barrel of West Texas Intermediate hit $68, the highest level in four years as seen below, and the yield on the ten-year U.S. Treasury Note hit 3 percent during April, a level last seen in January 2014. 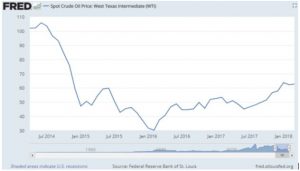 Check out the full report here.

The S&P 500 index experienced its first down quarter since 2015 on concerns about the rise in interest rates, a potential trade war with China, and privacy issues with some of the leading technology companies that may lead to increased regulation. The S&P 500 fell 2.68 percent in the month of March and was down 1.2 percent in the first quarter, excluding dividends.

Volatility has also returned to the markets with the S&P 500 registering six trading days of plus or minus 2 percent moves compared to zero in 2017. The Dow Jones Industrial Average (DJIA), more specifically, saw swings of minus 724, plus 669, minus 345 and plus 254 in the last few days of March.

Interest rates have moved higher as the yield on the three month U.S. Treasury Bill rose to 1.73 percent from 1.39 percent at year-end, while the ten-year Treasury yield rose to 2.74 percent from 2.40 percent over the same period.

After going well over a year without even a 3 percent pullback, there are signs that have been present prior to episodes of market turbulence in the past.