Mutual fund and ETF flows are a subcomponent in the Sentiment indicator in TJT’s proprietary InVEST Risk Model®. 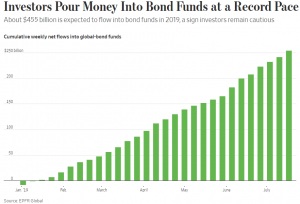 The U.S. stock market rallied in June following one of the worst monthly declines in May as President Trump’s threat to place tariffs on Mexico were cancelled, the Federal Reserve hinted of a July interest rate cut, and hopes for a truce in the ongoing trade war with China increased.

The Dow Jones Industrial Average (DJIA) rallied 7.1 percent in June, the biggest June rally in about 81 years, after declining by 6.6 percent in May. However, despite the attention-grabbing headline, the DJIA ended the month of June approximately 7 points higher than the April 30, 2019 closing level.

Moreover, although the markets have enjoyed an impressive first half in 2019, consider this: the “Dow” had to have the best monthly gain since 1938 in order to close just below a level it reached in January 2018 – about eighteen months ago. Clearly the markets have experienced massive volatility without much progress. In fact, even the S&P 500 index has gained just 2.4 percent from January 2018 to June 28, 2019.

The escalation of the trade war between the U.S. and China is starting to bite as the S&P 500 index fell by 6.5 percent in the month of May. As a reminder, over a year ago, on March 2, 2018, President Trump wrote on Twitter “trade wars are fun, and easy to win.”

On April 29, 2019, The Wall Street Journal ran a headline “Mnuchin Suggests China Trade Talks Could Wrap Up by End of Next Week.” At the conclusion of the last public meeting between the U.S. and China on May 10, 2019, Treasury Secretary Steve Mnuchin said the talks were “constructive.” A few hours later President Trump threatened China with tariffs on an additional $325 billion worth of goods from China.

In late May President Trump announced plans to impose tariffs on goods coming into the U.S. from Mexico. The uncertainty around global trade is destabilizing at best. It is clear that the Treasury Secretary’s May 10th trade talks were anything but “constructive.” The fact of the matter is we live in a global economy with supply chains all over the world. The notion that trade policy can change with one tweet is unsettling to say the least.

The yield curve is a subcomponent in the Interest Rate indicator in TJT Capital Group’s proprietary InVEST Risk Model®.

The significance of an inverted yield curve is that it preceded the last three downturns as seen in the chart below, and has also preceded every recession over the past 50 years.

Schedule an appointment to speak with an advisor to learn how TJT would manage your investment portfolio.

The S&P 500 index rose to an all-time high of 2943.83 following a 3.9 percent gain in the month of April boosted by a stronger-than-expected Gross Domestic Product (GDP) report and generally solid corporate earnings. The rhetoric from the ongoing trade tensions with China has been toned down, however, a comprehensive deal remains elusive as issues of enforcement and the roll-back of tariffs remain unresolved.

The S&P 500 gained 1.79 percent in March to close at 2834.40 as optimism over the trade negotiations between the U.S. and China and a 180 degree pivot by the Federal Reserve fueled the advance. The S&P gained 13 percent in the first quarter following the 13.9 percent decline in the fourth quarter of 2018. However, despite the impressive snapback, it is important to note that the S&P 500 traded at the 2834 level back in January 2018.

The ISM Manufacturing and Non-Manufacturing Composite Indices are subcomponents in the Economic Cycle indicator in TJT’s proprietary InVEST Risk Model®. 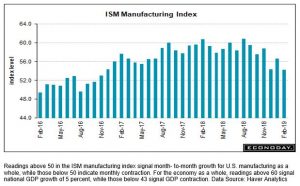 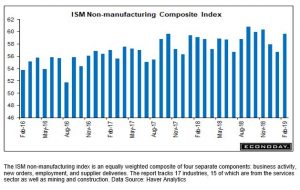 The rally in financial assets continued in the month of February with the S&P 500 index gaining 2.97 percent as the Federal Reserve backed off from their quantitative tightening policy (reducing the size of their balance sheet). However, while the gains since late December are welcome, the reality is that from February 28, 2018 to February 28, 2019 the S&P 500 index is up 2.6 percent, not much more than the yield on the one-year Treasury Bill.