The waterfall decline in March as a result of the COVID-19 and subsequent shelter-in-place orders was offset to some degree in April by the colossal support from the Federal Reserve and a series of Congressional relief programs totaling trillions of dollars.  The S&P 500 index rallied 12.6 percent in April.

It was not without pain, however, as the price of a barrel of oil in the futures market traded at minus $38 for the first time in history as the collapse in demand caused storage facilities to operate near capacity.

As a reminder, the unprecedented government-mandated shutdowns in many states were due to virus models that estimated as many as 2.2 million deaths in the U.S. alone.  Therefore, in order to prevent the healthcare system from being overwhelmed, according to the experts, drastic measures were needed.  The goal was to “flatten the curve,” which has caused devastating collateral damage to the economy and untold personal and financial hardships.

In light of the ongoing coronavirus (COVID-19) situation, we hope that you and your families are well and are staying safe.  Given the unprecedented nature of recent events and the shock that the virus has had on the economy, markets, and peoples’ lives, March 2020 will not soon be forgotten as the coronavirus wreaked havoc on the healthcare system, the economy, and the markets.

Given the devastating impact of COVID-19, we want to provide some context that we believe is critical to understand where we go from here.

The COVID-19 pandemic is a global health crisis that has also become a global economic crisis.  It was announced on Thursday (3/26) that a record 3.28 million workers applied for unemployment benefits last week.  The number of Americans filing for claims was nearly five times the previous record high.

The economic damage for the next 1-2 quarters, minimally, will be great especially for the leisure, travel and energy industries.  How much further beyond that and how quickly the economy will recover will be a function of whether the unprecedented fiscal and monetary policy that has been provided will limit the damage done to a temporary event or is the damage permanent.

Contact us if you have questions about managing your portfolio.

Historically, epidemics like SARS, Ebola, Swine Flu, … (see list below) have had short-term impacts on the economy and stock market.  Obviously, not all viruses are the same and no one knows the total impact yet of the coronavirus.  There is no doubt that the coronavirus will minimally impact GDP and corporate earnings for the current quarter.  Also, as we wrote on February 5th, “While the liquidity backdrop is favorable and the economy is growing, investors should brace for more volatility due to these ongoing developments and the proliferation of trading algorithms, which can cause wide swings in prices.”  We have seen this daily over the past several days, and expect it to continue in the near term.

While the volatility has been massive, it also presents opportunity. At a minimum we expect a healthy bounce. When stocks trading below their 50-day moving average fall below 15 percent, it has generally been a good opportunity for additional commitments. As of Friday February 28th, that reading was 3.1 percent. Moreover, Chairman Powell recently reiterated that the Fed will use tools aggressively if they are needed.

While volatility is likely to remain high, so are the opportunities. That said, financial markets rely on confidence, and when confidence erodes accidents can happen. For that reason, it is critical that all politicians work together to focus on a solution for all rather than score political points. 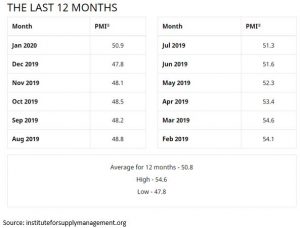